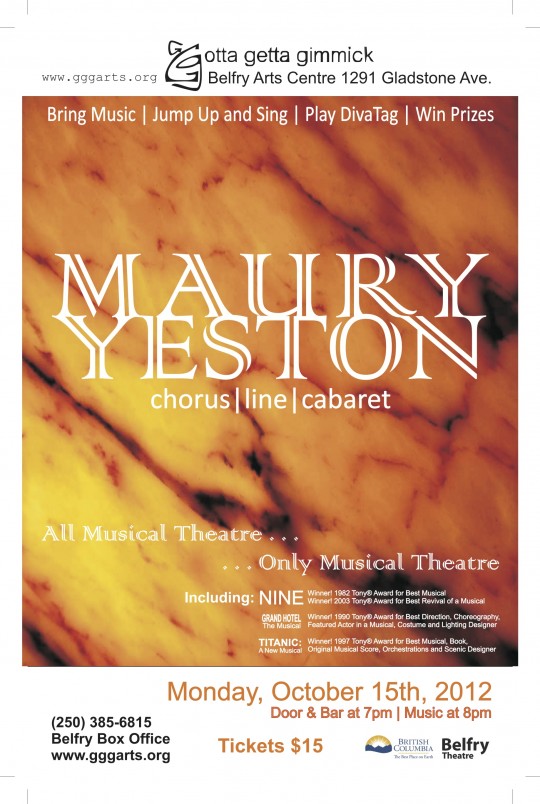 Doors at 7pm, Singing at 8pm

What is this?:  A night celebrating Musical Theatre and the folks who love it, co- hosted by Gimmick’s Clayton Baraniuk, and of course our Resident Singing Drag Queen, Gouda Gabor.  All musical theatre, only musical theatre.

From Butchart to the Belfry to the Fringe Mob, GGG is back with the fifth installment of the Chorus/Line Cabaret series – exploring the vast and varied work of musical theatre with some of Victoria’s best singers and performers.  (more information – www.gggarts.org)

Act 1 –We sing you selected music by composer Maury Yeston, featuring a cast of more than 20 singers drawn from the region’s professional and amateur talents (and a few special  surprise visitors!).

Act 2 – You sing us what you’ve got. We’ll go “below deck” with Resident Singing Drag Queen Gouda Gabor, and let the musical theatre party really get rolling Join in, or listen and toe tap. No Holds Barred – Any Musical Theatre song is fair game. Bring your sheet music, sign up at the door, belt a favorite and win a prize.  As always, we bring you the infamous “Diva Tag”, Games, and a big overhead projector for Sing-alongs.  The Belfry Canteen will be open – Bring your ID!

Where:  The Studio of the Belfry– 1291 Gladstone Ave at Fernwood.

Generously supported by the Province of British Columbia, theBelfry Theatre, with assistance from Michael Shamata.