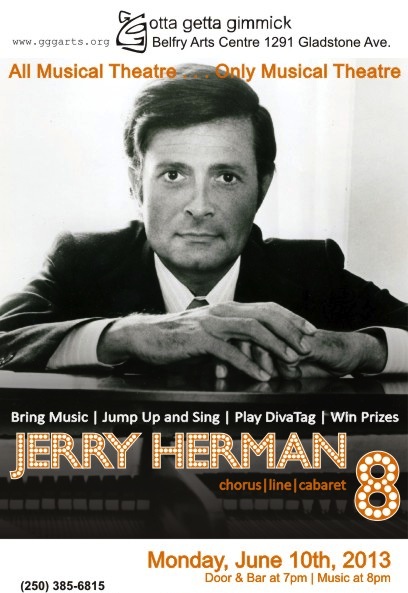 A night celebrating Musical Theatre, and the folks who create it, perform it and love it, featuring more than 20 singers. On June 10, we celebrate the king of the showtune – Jerry Herman. All musical theatre, only musical theatre.

GGG is back with the eighth installment of the chorus|line|cabaret series – exploring the vast and varied work of musical theatre with some of Victoria’s best singers and performers. Hurry – the last 5 shows sold out!

Act 1 – Studio – We perform selected works of the only composer-lyricist in history to have had three musicals that each ran more than 1500 consecutive performances on Broadway.  There is never an evening when, somewhere in the world, the music and lyrics of Jerry Herman are not being sung by a lady in a red dress, or a lady with a bugle, or a middle aged man in a wig and a boa.  Hello, Dolly, Mame and La Cage Aux Folles are some of the most performed, most loved and most classic Broadway musicals in history.  We’ve plucked some favorites and some fantastically obscure pieces from these shows as well as from Mack and Mabel, The Grand Tour, Milk and Honey and Dear World.  Jerry Herman is king of the showtune and champion of the underdog.  As Jerry’s anthemic  lyric defiantly states:

“I am what I am – I am my own special creation.

Your life is a sham, ’til you can say – outloud,

So come and join more than 20 of Victoria’s best singers and celebrate everything that is fabulous – especially Jerry Herman!
Act 2 – Lobby – You sing us what you’ve got and let the musical theatre party really get rolling with spur of the moment Jump Ups. – Any Musical Theatre song is fair game. Bring your sheet music, sign up at the door, belt out a favorite and win a prize. As always, we bring you the infamous “Diva Tag”, Games, and a big overhead projector for Sing-alongs. Join in, or listen and tap your toes. The Belfry Bar will be open – CASH ONLY – Bring your ID! You never know who might be at the Cabaret…

Curated and executed by Brad L’Écuyer and Gotta Getta Gimmick, with very special assistance from Tracey Moore and Jessica Hickman.

Limited Seating. One night only. Tickets on sale Friday, May 31 through the Belfry Box Office.

Join the GGG Chorus | Line, study larger ensemble works, acting and singing on Monday nights. Our next musical workout begins in September. This “musical theatre gym” is free to join, open to all – email gimmick@gggarts.org.