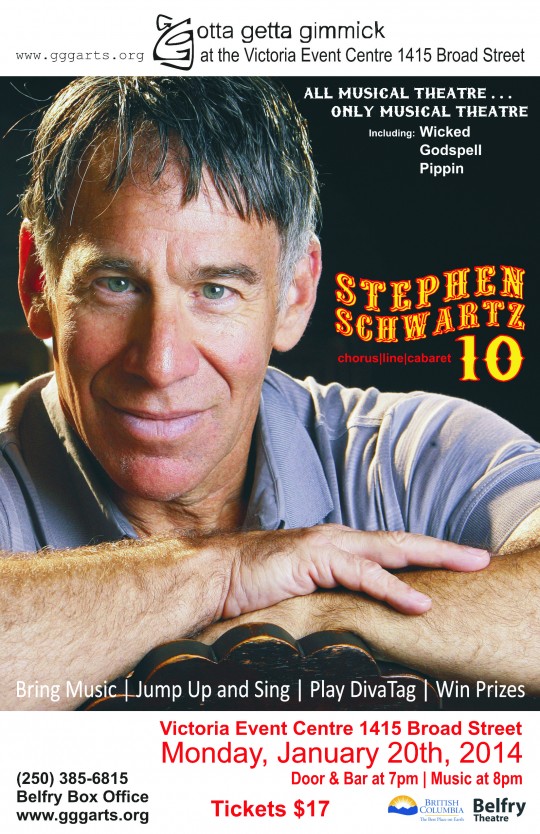 Doors at 7pm, Singing at 8pm

With the help of Glynis Leyshon

GGG kicks off 2014 by celebrating the theatre music of Stephen Schwartz.  An famous and infamous Broadway character who’s shows continue to dominate the great white way, despite having never won a Tony award! With more than 20 Singers, you ‘ll never guess who will turn up  and belt out a showstopper as we celebrate our 10th Cabaret in a big big way!

Stephen Schwartz is the composer/lyricist that gave us Godspell, Pippin, The Baker’s Wife, The Magic Show, Children of Eden and the blockbuster, Wicked. He contributed songs to the reviews Working and Personals and lyrics for Rags and Disney’s animated films Pocahontas, The Hunchback of Notre Dame and Enchanted and is the composer/lyricist for The Prince of Egypt. Stephen Schwartz has won a Drama Desk award, three Grammy Awards, three Academy Awards and has been nominated for six Tony Awards.

Act 2 of the cabaret kicks the party into high gear! Beginning with a rousing Sing-a-Long, the evening becomes a casual New York style Cabaret – bring your favorite party pieces, flip through the scores and find a duet partner – interspersed with musical theatre games including the soon-to-be-infamous “Diva Tag”. Compete for prizes, relax and listen to the music, have a drink and meet new people. You’ll leave the Cabaret humming a showtune – a little more musical theatre savvy – hitch-kicking all the way home!

We still love the Belfry Theatre more than any other theatre in town! Check out what is keeping them busy this month, and this spring – www.belfry.bc.ca

Tickets will go “off sale” at 5pm on January 20th, with sales resuming 1 hour prior to the performance, at the performance Venue – The Victoria Event Centre – 1415 Broad Street.

With the help of Glynis Leyshon

Supported by the Belfry Theatre, the Victoria Multiculturalism Society, and the Province of BC through the Gaming Policy and Enforcement Branch.