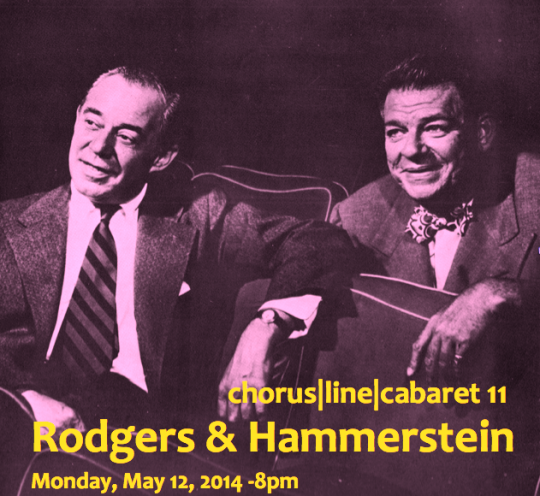 Gotta Getta Gimmick ushers in spring with Rodgers & Hammerstein.  Join us back at our beloved Belfry Theatre on Monday, May 12 for an unforgettable evening of wonderful music and storytelling and a good ole musical theatre party!

Richard Rodgers had given Broadway several blockbuster hits with lyricist Lorenz Hart (Pal Joey, Babes In Arms, The Boys From Syracuse) and Oscar Hammerstein II with Jerome Kern had already reinvented the Broadway musical with the ground-breaking Show Boat.  But it wasn’t until they teamed up to musicalize the play “Green Grow The Lilacs” that the American musical would be changed forever.

Richard Rodgers and Oscar Hammerstein II were both seasoned, celebrated professionals and masters of their crafts when they decided to work together in the early 1940′s.  Often considered the greatest musical theatre writing partnership of the 20th century, Rodgers and Hammerstein’s landmark pieces laid the groundwork for “integrated” serious musicals often dealing with sexism and racism.  Telling the story through scenes, songs and dance, the blockbuster R&H musicals of the 1940′s and 50′s initiated the Golden Age of the Broadway musical and garnered the pair and their work 34 Tony Awards, 15 Academy Awards, 2 Grammy Awards, a Pulitzer Prize for Drama and a 1999 postage stamp.

Act 1 of GGG’s eleventh chorus|line|cabaret will celebrate these groundbreaking pieces of theatre with a look at both the hits and the lesser-known songs and shows in the Rodgers and Hammerstein catalog. Hosted by Richard Hurst, with more than 25 singers under the direction of the incredible Jacques Lemay and Janis Dunning, come hear new and old favorites from “Oklahoma!”, “Carousel”, “South Pacific”, “The King and I”, “The Sound of Music”, “Flower Drum Song”, and “Allegro”.

Act 2 of the cabaret kicks the party into high gear! Beginning with a rousing Sing-a-Long, the evening becomes a casual New York style Cabaret – bring your favorite party pieces, scores and sheet music, or find a duet partner  and jump up, play musical theatre games including the infamous “Diva Tag”, or jut toe tap and sing-along. Compete for prizes, relax and listen to the music, have a drink and meet new people. You’ll leave the Cabaret humming a showtune – a little more musical theatre savvy – hitch-kicking all the way home!

Supported by The Belfry Theatre and the Province of British Columbia