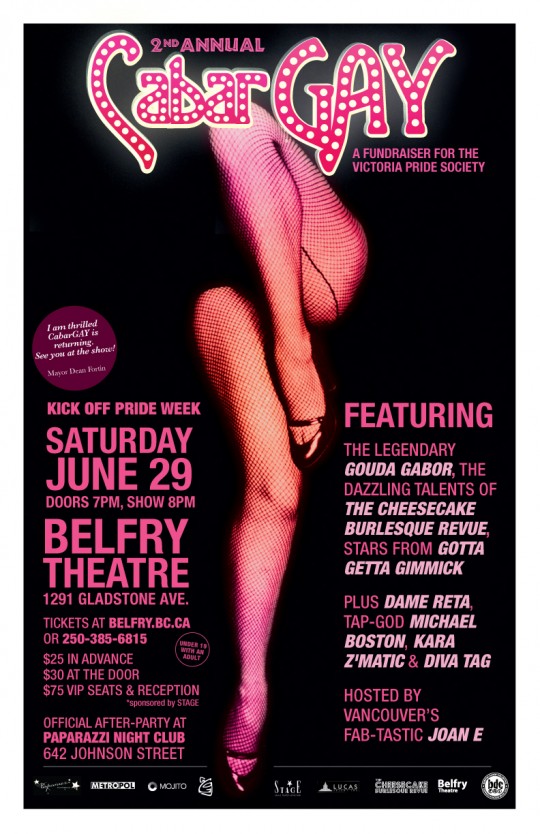 GGG is proud to take part in this Pride Fundraiser. We will be reprising some William Finn and Jerry Herman to help celebrate! 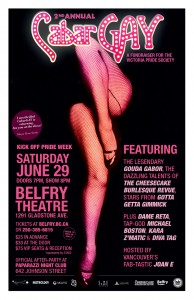 2nd Annual Benefit in Support of the Victoria Pride Society

At The Belfry Arts Centre – 1291 Gladstone Avenue  at Fernwood.

Joan E and Gouda Gabor host CabarGAY on stage at the Belfry.

VICTORIA, B.C. —(June 3, 2013) – Hold on to your rainbow hats, your corsets, and your feather boas  – kick off Victoria Pride week 2013 with the return of Pride at the Belfry… CabarGAY. Saturday June 29 at 8 PM Victoria’s historic Belfry Theatre will be shaking on the Richter scale as dozens of the city’s top GLBT performers and their friends come together in this evening of song, dance and spectacle benefiting the Victoria Pride Society. Local drag icon, the legendary Gouda Gabor is joined by the dazzling talents of The Cheesecake Burlesque Revue, stars from the Gotta Getta Gimmick, and Michael Boston from the Boston Dance Collective, among others.

Coming to Victoria to host this evening to remember is the fabulous Joan E, one of the stars of cult gay flick CONNIE AND CARLA. A proud philanthropist, Joan E has received numerous accolades including a U.S. State Congressional Medal and both a Diamond and a Golden Jubilee Award from Her Majesty Queen Elizabeth II. The evening will feature some of the best and most favoured performances in support of the pride society, with a special Pride Edition of Gotta Getta Gimmick’s Diva Tag, and a keynote address from the divine Dame Rita, with more than 45 years of drag experience under her belt.  Remember the meaning of pride, and join in a rousing round of “We Are Family”.  June 29, 8pm – Belfry.

Mayor Dean Fortin says “I am thrilled that CabarGAY is returning to the Belfry theatre again for 2013. Last year was fantastic…see you at the show!”

Gouda Gabor, the legendary Budapest Bombshell has “done” films, TV, clubs, dinner theatre and probably a few of your husbands. Vancouver audiences have heard her singing live in many clubs including the THAT’S NO LADY show that won the city’s BEST LIVE PERFORMANCE award. She has also appeared at the Arts Club Revue Theatre in BURLESQUE VALENTINE, hosted and performed in FIT FOR A QUEEN at the Stanley Theatre. In Victoria she has starred in numerous night club shows and enjoys channeling her inner Angela Lansbury & Elaine Stritch in the GGG Chorus Line Cabarets at the Belfry Theatre.

Joan-E is the creation of entertainer and philanthropist Robert Kaiser. She has earned various titles such as Imperial Crown Princess, Entertainer of the Year, and XXVIII Empress of Vancouver. She has served as the MC for various charitable &community events including Art for Life, Davie Days, Gay Ski Week, The Leo Awards, Starry Night, Fit for a Queen and Queens’ Care and as host for Bingo for Life she has raised over a quarter of a million dollars for Friends for Life, a charity committed to assisting those who live with life-threatening illnesses. Joan’s film and television appearances include cult flick Connie and Carla, Fetching Cody, Davinci’s Inquest and The Collector, for which she earned a Leo Award nomination.

The Cheesecake Burlesque Revue Armed with powerhouse personalities, high- energy acts, phenomenal costumes, and a trunk full of glitter, the Cheesecake Burlesque Revue are guaranteed to tickle your funny bone and dazzle you with delight. Outrageously fun, wickedly cute, and deliciously captivating, these performers are a delightful necessity that is guaranteed to empower, inspire, and entertain audiences of all ages. Internationally acclaimed the world over, the girls will have you loving the skin you’re in and shouting for more! www.cheesecakeburlesque.com

Gotta Getta Gimmick is a Victoria-based musical theatre company that has been creating and producing theatre in and around the city for over a decade. GGG  has created original pieces for Theatre SKAM, Intrepid Theatre, Vancouver’s Firehall Arts Centre and The Belfry Theatre, as well as producing musicals including Sweeney Todd, Falsettos and Little Shop of Horrors. GGG’s chorus|line|cabaret series has become the sell-out, favourite musical theatre party in Victoria. GGG strives to create and present hip, exciting theatre in conventional and unconventional spaces to an accessible and diverse audience while creating opportunities for developing and established theatre professionals here in Victoria. www.gggarts.org or Facebook/ gggarts

The Belfry– In the past 30 years the Belfry theatre company has produced 230 plays, including 158 Canadian plays, and more than 33 premieres in their heritage home in Fernwood. Many of those premiere productions have gone on to acclaim across Canada, in the U.S., Australia, Europe and London’s West End. The Belfry produces up to 12 plays per year: one or two summer productions, a four play Mainstage series, and SPARK, a mid-winter festival of innovative and alternative work from across Canada. www.belfry.bc.ca

The Victoria Pride Society’s mission is based on empowerment. We empower those who are – or think they might be – gay, lesbian, bisexual, transgender, two-spirited, intersex, friends and allies. We strive to create a better public understanding of our community’s history, courage, diversity and future. The Victoria Pride Society was born from a casual picnic in Beacon Hill Park over 20 years ago. Since the time of